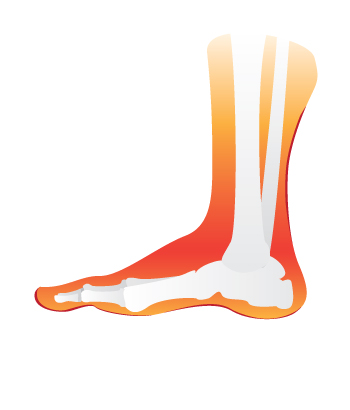 The term "ankle sprain" is usually used to describe injury to one or a number of the ligaments around the ankle. The lateral ligament complex - anterior talofibular ligament, posterior talofibular ligament, and calcaneofibular ligament support the outside of the ankle and are injuried when you "turn" your ankle over on the outside of the foot.  The Deltoid ligament ligament supports the inside of the ankle and is far less commonly injured.  Ligament injury can be a simple Grade I injury which involves the tearing of a few fibres of the ligament resulting in pain and some initial restriction of ankle movement to a Grade III inversion injury where the ligaments are completely torn resulting in long term instability of the ankle if not managed correctly.  Inversion injury to the ankle may also result in weakness of the muscles that support and stabilise the ankle.  It is therefore important to get your ankle assessed by a your physiotherapist or doctor if there is significant swelling and bruising around your ankle and if you have difficulty placing weight on it after twisting it.

<< Back to Sports Injuries